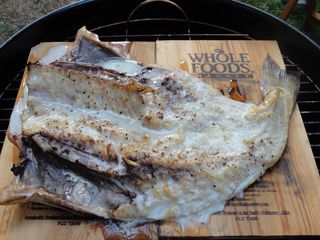 Scrod is most often broiled, so Mrs. Bliss's recipe for roasting it intrigued us. What would be the difference in taste between a nice piece of broiled scrod, as we've had any number of times at home and in restaurants, and roasted scrod? We were eager to find out.

But there was a prior question in need of an answer: What, exactly, is scrod? In our commentary on this recipe in Northern Hospitality, we discuss the word's etymology--few people have any idea what fish they're eating when they eat scrod, despite its enormous popularity in New England.

Is it a young or small cod? The tail of a haddock? Or any pieces of fish or small fish suitable for broiling? It turns out that there's no exact definition for scrod—it can mean any of the above.

For our fish roasting experiment, we used the type of fish mentioned in the second paragraph of Mrs. Bliss's recipe—a luscious, fat haddock. Mrs. Bliss says to "procure a fat scrode, and require the fishmonger to open and dress it." We purchased a fish weighing 3 lbs. (sans its head), which had been cleaned and gutted. This regal poisson came right to our door by special order in an overnight delivery from Legal Seafoods in Boston.


It arrived expertly wedged among ice packs and looking as firm, fresh, and beautiful as it undoubtedly had the moment it emerged from the sea.

But it didn't arrive opened, as Mrs. Bliss recommends. It was in need of butterflying—that is, breaking its quite substantial ribcage so that it would lie flat. This took some doing by the stronger of the two of us, with our largest knife. It was finally accomplished and the opened fish was ready for its minimal dressing with "a little salt and pepper."

Because we don't have a fireplace and hearth, we decided to roast our fish outside on our small Weber grill, covering the grill with two cedar planks obtained from our local Whole Foods Market and using natural wood charcoal for grilling.

The planks were used in place of the "board" to which Mrs. Bliss directs her readers to fasten their flattened fish. They (the planks, not Mrs. Bliss's readers) required soaking for an hour in cold water before they were to be used (to retard their burning on the grill). To ease the process of removing the fish when cooked, we brushed one side of the planks lightly with olive oil. We couldn't "stand the board up before a brisk fire," as Mrs. Bliss instructs. But we could place them above a brisk fire, so that's what we did.

Then for the backyard fish roast, an instant invitation to neighborhood cats and dogs to join the fun. We can't bring you sounds on our blog, but trust us that we roasted our fish to the honeyed crooning of the Lab who lives next door.

We spent a long time discussing how we were going to flip our haddock once it was roasted on one side. We planned to insert a pizza tin underneath the planks, lift out the pizza tin, planks, and fish together (wearing asbestos mitts), and with a cookie sheet held over the fish, flip it over. Then we planned to use spatulas to transfer the fish back directly onto the grill, with the side that was previously face up now face down over the coals.

On a larger grill, or with a firmer fish, this well might have worked. But as our lovely fish grilled, we soon realized its delicate flesh would fall apart under any such maneuver. Mrs. Bliss understood our dilemma, thus her instructions to "be careful not to break the fish in transferring it from the board to the gridiron." In that we had neither board, per se, nor gridiron, per se, but a modern, very hot Weber grill and an expensive haddock nicely planked, we decided to let the fish roast away, just as it was.

The butterflying had rendered the fish thin enough so that the hot coals were cooking it thoroughly without turning it directly onto the grill. The scents of the steaming cedar planks and the roasting fish were now provoking yowls of anticipation from the neighborhood pet population.

There were some differences between Mrs. Bliss's beginning the cooking process by attaching the fish to a board standing "before a brisk fire," and our procedure of cooking the fish on boards directly above a brisk fire. Obviously, we unfortunately had none of those appealing gridiron marks on the fish. However, this was compensated for by the nicely crisp skin and tail of the roasted haddock. It also took less time to cook the fish using our method. In the end, we grilled our planked haddock for just about 30 minutes, then removed it to a serving platter using two spatulas.

As Mrs. Bliss advises, we poured melted butter over the fish, and served it hot, along with fresh boiled corn, fresh tomatoes provided by a friend, and baked potatoes.

The fish was utterly delicious! A revelation really.

Thanks to Mrs. Bliss, haddock roasted on cedar boards has found a permanent place in our summertime grilling repertoire.

The original recipe, with commentary, can be found in Northern Hospitality, p. 173.