"To Roast Venison," from Gervase Markham's The English Hus-wife (1615) 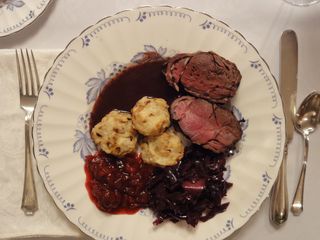 Roast Venison and All the Trimmings, from an Early Seventeenth-Century Recipe

Deer Me-at!
Deer-hunting season has been over for a month or two now, but for many hunters’ families there’s still plenty of deer (not to mention elk, moose, caribou, and antelope) venison in the freezer. And for the rest of us there is now available on the U.S. market a nice selection of both wild and farm-raised venison. The well-stocked Cambridge, MA market Savenor’s was the source of the gorgeous loin of venison we used in our recreation of Markham’s dish. The meat was pricey (about twenty dollars a pound), but far less expensive than a venison dinner for two in a fancy restaurant—and it provided enough meat for six to eight servings. For a special occasion meal, especially when company’s coming, this dish is an absolute knockout. It’s also quite easy to prepare.

Although Markham spit-roasts his meat over an open fire, we baked ours on a rack placed inside a roasting pan in our electric convection oven. If you have a way to spit-roast your meat—and catch the juices beneath—by all means do so. But we can attest that oven-roasted venison, when the meat’s been properly larded, is tender and juicy with just enough drippings to make a dark and luscious gravy. The drippings, along with some red wine (we took a liberty here, as otherwise we’d have had too little gravy), vinegar, and bread crumbs, are boiled and seasoned with sugar, cinnamon, ginger, and salt. We served our venison roast and gravy with homemade cranberry sauce, small baked potato/oatmeal cakes (Scottish “skirlie” potatoes) and braised red cabbage made soft, sweet, and slightly tart with redcurrant jelly, citrus fruit, port wine, and butter. We chose a good California Cabernet sauvignon for our beverage. True, neither this particular grape varietal nor the California region would have been known to Gervase Markham, nor to the early New England settlers who imported and presumably cooked from his book, The English Hus-wife. But we firmly believe that if Markham or his colonial contemporaries had had the ability to time travel, they would have enjoyed the wine just as much as they would have relished our rendition of his “To Roast Venison.”

The Ingredients
Serves six to eight

How We Made It
Before roasting, we rinsed the loin under cold, running water, patted it dry and larded it, inserting a larding needle lengthwise into the loin in five places—three insertions were made at one end of the loin and two at the other. Each insertion reached about halfway through the loin. To load the needle, we used thin strips of fresh leaf lard, which comes from around the pig’s kidneys and is generally considered the best fat the pig has to offer.

If you don’t have a larding needle (readily available on Amazon and in kitchen supply stores), make slits in your piece of venison with a skewer or long, narrow knife and insert the lard into the slits. Alternately, you can cover the roast with lard (this method is sometimes called barding). With lean meat such as wild game (farmed game is fattier, to be sure) larding is a step you don’t want to skip. Otherwise, you may find that your expensive roast comes out of the oven dry and tough.

After this preparation, we studded the loin with whole cloves, put it on a rack inside a roasting pan, covered it lightly with waxed paper, and refrigerated it while we preheated the oven and prepared our side dishes of cranberry sauce, skirlie potatoes (mashed potatoes with toasted oatmeal, onions, and a bit more lard), and braised cabbage.

Now to baking the meat. When our electric convection oven reached 400°F, we were ready to pop in the roast and, on a rack below, the baking sheet of potato cakes, which got nicely browned in about fifteen minutes. We roasted the meat for ten minutes at this temperature, then reduced the temperature to 325°F and continued roasting for about thirty minutes. To avoid overcooking the meat, we checked it periodically with a meat thermometer. When the loin’s internal temperature reached 145°F, we removed it from the oven and allowed it to rest for ten minutes before carving it. Our meat was a perfect medium rare.

While the meat was resting, we carefully scraped into a heavy saucepan the small bits of meat and juice that had coagulated in the roasting pan. To this nectar we added the red wine, bread crumbs, cider vinegar, ground ginger, brown sugar, and sea salt.

We brought this mixture to a simmer and stirred vigorously until we had an aromatic, smooth, deeply brown gravy. Venison doesn’t make much gravy, so we were careful to simmer it only long enough to blend the ingredients but not so long as to cook away any of this precious stuff.

With our table set, our cranberry sauce made, our skirlies baked, our cabbage fragrant and warm, and our venison looking utterly regal, we were ready to dine in high seventeenth-century fashion.

Eating a well-roasted piece of venison that is napped with a rich gravy and served by candlelight of a winter’s night makes one feel a bit like Lord Grantham. But as we know, the Crawleys of Downton Abbey didn’t invent high English style; they merely perpetuated it. Since Markham’s day and before, the English have been known for their skill in roasting meat and for their passion, among the nobility, at least, for wild game. Following Markham’s recipe, you can entertain your family and friends with this sumptuous English roast game dish that both Plymouth Pilgrims—at first through the generosity of Indian hunters—and twentieth-century Anglican earls would have enjoyed.

Gervase Markham's original recipe, with commentary, can be found in Northern Hospitality, pp. 208-209.