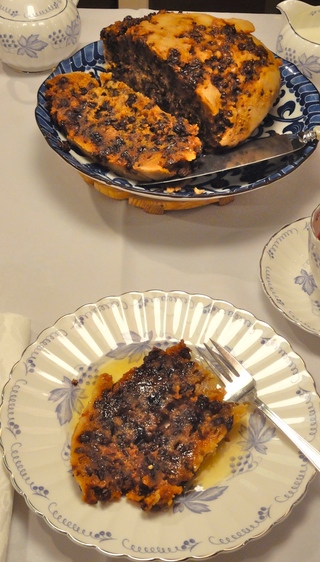 For Thanksgiving This Year, Pull Out a Plum

A Classic Yankee Thanksgiving Dish
In her novel Northwood, first published in 1827, Sarah Josepha Hale gives a description of a typical New England Thanksgiving and, as we would expect, turkey and pumpkin pie are duly noted. But along with these dishes, standards of the national feast to this day, Hale includes an array of foods no longer associated with the festival: "surloin of beef, flanked on either side by a leg of pork and joint of mutton . . . a goose and pair of ducklings, . . . [and] that rich burgomaster of the provisions, called a chicken pie."

We know we are in unfamiliar, if tantalizing, historical territory when we encounter joints of meat, ducklings by the pair, and chicken pies on a Thanksgiving menu. But there are more pleasant surprises yet to come. On the dessert table of this imaginary feast of long ago, side by side with the "pies of every name and description ever known in Yankee land," are to be found "several kinds of rich cake, and a variety of sweetmeats and fruit." And finally—which brings us to Mrs. A. L. Webster's lovely recipe—Hale notes "a huge plumb pudding."

We think of plum pudding (plumb is an old-fashioned alternate spelling) as an English Christmas dish, as indeed it was in Webster's and Hale's day. As it still is. But the Puritans who settled New England made a point of distancing themselves from the English Christmas and all its trappings, which they considered "papistical," perhaps even paganistic. Yet, as the harvest was brought in, or there were other reasons to celebrate the blessings bestowed upon them by Providence, early New Englanders found their own reasons to celebrate. And what better way to do so than to adopt, and adapt, the cultural—and culinary—fare of the Mother Country?

So in time New Englanders resorted to using traditional English Christmas dishes, including turkey, goose, and mince pie, as part of their Thanksgiving menu. Those are the dishes that still take pride of place on many modern Thanksgiving tables. But the catalog of English foods enjoyed at American Thanksgivings was a bit more extensive than that. Hale's "huge plumb pudding," displayed and eaten in a Yankee farmhouse on Thanksgiving day, illustrates the point. A few years later, in 1844, we find Mrs. Webster giving a recipe for "English" plum pudding in her very American cookbook, The Improved Housewife. So as well as adding to the Christmas festivities in England and the Thanksgiving festivities in New England, the old plum pudding served as a kind of cultural ambassador between two countries whose histories, and tastes, were still closely intertwined in the nineteenth century.

As for us now, lots of us have turkey for both Thanksgiving and Christmas. Why not revive a bit more of the traditional New England menu and include a nice plum pudding as well?

You'll also need two strips of double-thickness cheesecloth, about 30 inches long and 9 inches wide, and a bit of extra flour for dusting.

How We Made It
With a large spoon, we mixed the flour, currants, raisins, sugar, nutmeg, and salt and added the suet. Then using a stand mixer we added the brandy, eggs, and milk.

Now the pudding was ready to be put into our cheesecloth pudding bag, which we proceeded to create. We cut our cheescloth strips, soaked them in hot water, wrung them out, and draped them across each other in a 4-liter (just over a gallon) mixing bowl. The strips were long enough for there to be four generous ends to tie together into a bag.

Now the pudding was ready for the pot, and the pot was ready for the pudding. We boiled it for six hours, replenishing the water in the pot as needed. About ten minutes before we expected the pudding to be done, we made the sauce, melting the butter in a saucepan, adding the sugar and Madeira, boiling for about a minute, and mixing in the rosewater.

With more than a little trepidation (this was our first boiled-bag pudding adventure), we removed the pudding from the pot, unwrapped it . . . and plated a gorgeous "English Plum Pudding"!

We hastened to cut a couple of slices, to pour on some of the lusciously rich sauce, and thoroughly to enjoy digging into this traditional, sinful dessert treat.

The complete recipe, with commentary, can be found in Northern Hospitality, p. 334.