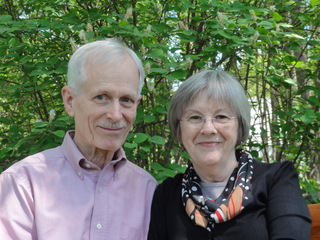 Keith Stavely and Kathleen Fitzgerald have written three highly acclaimed books together about New England and American food history: United Tastes: The Making of the First American Cookbook (University of Massachusetts Press, 2017); Northern Hospitality: Cooking by the Book in New England (University of Massachusetts Press, 2011); and America's Founding Food: The Story of New England Cooking (University of North Carolina Press, 2004; pbk. 2015). They are the co-authors of two entries, "Boardwalks" and "Fudge," in The Oxford Companion to Sugar and Sweets (Oxford University Press, 2015). Two papers they gave at the international Oxford Symposium on Food and Cookery, "Plainness and Virtue in New England Cooking," (2008) and "Eating in Eden: The Jonny-Cake Papers of 'Shepherd Tom,' (2006) appear in the Proceedings of the Oxford Symposium, published by Prospect Books. America's Founding Food was named a "2005 Best of the Best from University Presses" selection by the Association of American University Presses. United Tastes was awared the 2017 Bruce Fraser Award of the Association for the Study of Connecticut History.

They have spoken at international conferences, historical societies, libraries, museums, and to a variety of community and professional groups, bringing the hidden history and cultural significance of New England and early American foodways to light. In their first book, America's Founding Food, they painted their unique synthesis of culinary and cultural history on a broad canvas. In their second, Northern Hospitality, they brought this synthesis directly into the kitchen, with over 400 historic and eminently cookable recipes. In their most recent book, United Tastes, they explore the early national world of the first American cookbook, American Cookery, and its elusive author, Amelia Simmons, illuminating its full significance in relation to the larger and longer patterns of American history.

Stavely is a writer and scholar whose interest in the Puritan influence on American and English culture has resulted in a number of critically-esteemed books and articles. He has been a Guggenheim and American Council of Learned Societies fellow and a winner of the Modern Language Association Prize for Independent Scholars. He holds a B. A. and a Ph. D. in English Literature from Yale University and a Master of Library Science from Simmons College. He taught at Boston University, Boston College, and Ohio State University and worked for many years as a librarian in Massachusetts public libraries, retiring in 2008 as director of the Fall River Public Library. His earlier published works include The Politics of Milton’s Prose Style (Yale University Press, 1975), Family Man (Contemporary Books, 1978), and Puritan Legacies: Paradise Lost and the New England Tradition (Cornell University Press, 1987, pbk. 1990).

Fitzgerald holds a B. A. in English Literature from Boston University, a Master of Divinity from Andover Newton Seminary, and a Master of Library and Information Studies from the University of Rhode Island. She worked for five years as a college chaplain, for eight years as a coordinator of a soup kitchen, and for over thrity years as a public librarian in Massachusetts and Rhode Island. In 2019, she retired as director of the Willett Free Library in Saunderstown, Rhode Island.

The one descended from the Protestant English settlers of New England and raised in the Midwest, the other a native New Englander of Irish descent, Stavely and Fitzgerald bring a diversity of cultural background, experience, and perspective to their ongoing collaborative studies of New England and American history. Their hope is that this diversity informs and humanizes their work, helping both to attune them to the muted voices of history and to listen carefully and fairly to those who have been more audible.

Independent scholars Stavely and Fitzgerald are also husband and wife. They live in Jamestown, Rhode Island.