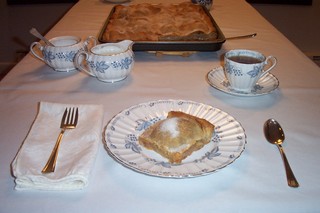 A Pip of a Tart from the Seventeenth Century

Piping Up about Pippins
The pippin was introduced into England in the sixteenth century from (where else?) France and quickly became the most popular variety of apple in that apple-loving nation. (The English preference for apples above all other fruits is suggested by the fact that when the English set out to make pies with an unfamiliar New World vegetable such as the pumpkin, they chose to swaddle the sliced pumpkin in sliced apples—see our post on "Pumpion Pye.") Though apples in general became at least as popular in New as in Old England, the pippin never made it into the front rank of New England pomological prestige. One can find occasional references in the historical record to orchards that grew, for example, the "Ribstone Pippin," and in the eighteenth century the American colonies acquired their own pippin, called the Newtown after the Long Island village where it originated. But otherwise, the pippin did not make its presence much felt.

This remains true today. You have to search pretty diligently through the offerings of New England orchards before you'll find the few places cultivating pippins, almost exclusively of the Newtown variety. And you have to do so at the right time. In this part of the world, pippins are ready to be picked only for a couple of weeks toward the end of October. We got ours from Red Apple Farm in Phillipston, MA, and very good ones they were. But they weren't, alas, very good for our pippin tart, since we had needed to be making that the previous May when pippins were not to be had. We used them instead in the "Pumpion Pye" mentioned earlier. Rest easy though. A perfectly fine pippin tart can be made with an apple that's about as ubiquitously and perpetually available as any nowadays—the Granny Smith.

How We Made It
First we preheated the oven to 450°. Then we lined the bottom and lip of the baking pan with a little more than half the pie crust and placed the Granny Smith halves in the crust-lined pan.

For the crust, we used an Amelia Simmons recipe for a puff paste made with suet as well as butter (Northern Hospitality, p. 248), but Granny Smiths, whole cloves, and cinnamon sticks aren't that particular. They'll keep company with any good pie crust. 4 cups of flour and 3 sticks (1½ cups) of butter will make enough crust for both the baking pan lining and the top covering (feel free to substitute half a cup or 8 tablespoons of lard for one of the sticks of butter).

With the apples now readied for the subtle spicing and sweetening that would occur during baking, we covered them with the remaining crust, and put the tart into a 450° oven. After 30 minutes, we reduced the heat to 375° and continued baking for 35 minutes more.

While the tart was baking, we melted the 6 tablespoons of butter and mixed it with the 2 tablespoons of rosewater. When the 35 minutes at 375° were up, the crust was golden and the apples were nicely softened, so we removed the tart from the oven.

The final steps were to brush the tart with the rosewater-flavored melted butter, "strow on it," in Markham's words, "good store" of sugar (i.e., the remaining 2 tablespoons), and bake it at 375° for another 15 minutes. Then it was done, and ready to be enjoyed!

The original recipe, with commentary, can be found in Northern Hospitality, p. 309.