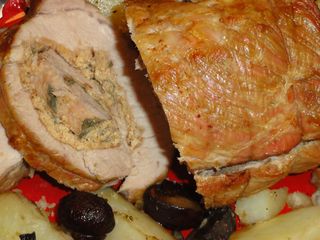 In The Culture of Food (Blackwell, 1994), historian Massimo Montanari writes that the ancient Celts and Germans did not have a "plant of civilization," (the phrase is taken from Fernand Braudel) such as the wheat that served this purpose for the Greeks and Romans, the corn for Native Americans, or the rice for Asians. Instead, these forest peoples had an "animal of civilization," the pig, "to express and embody the cultural and productive values" of their civilizations. Thus we are treated to Celtic myths, such as The Story of Mac Dathos' Pig and Germanic tales of a paradise in which the great pig Saehrimnir provides its meat to fallen heroes.

Like the Celts and Germans, the English and their New England cousins relied on pork as a dietary mainstay. Until the latter part of the nineteenth century, that is, when the spread of notions of cultural, including dietary, refinement resulted in a new squeamishness when it came to eating pork. At the same time, the environment in which most families had kept hogs was changing. For centuries, most hogs had been allowed to forage freely around towns, pastures, fields, and farms, gleaning what they could. If confined, they had been fed with household scraps or the organic matter from gardens and fields. But as urban density accompanied industrial growth, the hogs' diet often changed to things like brewery slops and commercial food waste. Some said the changed diet affected the taste of the meat. Fears grew of tainted pork. These factors contributed to the decline in pork's standing.

Happily for us, Sarah Josepha Hale's 1852 recipe for "Loin and Neck of Pork" predates these developments. In fact, it predates them by quite a bit because the American Hale took her recipe directly from Englishwoman Maria Rundell's 1807 edition of A New System of Domestic Cookery. We only discovered Mrs. Hale's plagiarism after the publication of Northern Hospitality. We pride ourselves on tracking the recipes we selected for our book to their first appearance in print, and using that version. But we missed this one. Nevertheless, it's a great recipe. So hats off to Maria Rundell for the original--and hats tipped to Sarah J. Hale for reproducing it in her book. Because we call it Hale's recipe in Northern Hospitality, that's how we'll refer to it here. Now to the pork loin.

The recipe is actually several recipes in one--for a neck or loin of pork that has been simmered, then coated with egg, seasoned with chives, sweet herbs, and bread crumbs, and roasted; for a neck or loin that has first been boned (it can also be parboiled at this stage), then cut open, stuffed with a "forcemeat" of sage, bread crumbs, salt, pepper, and allspice berries; and finally for a hand of pork (cut from the front leg), that has been boned, stuffed, rolled, and roasted.

We don't have an open fire before which to roast our meat, as Hale's instructions assume. Come summer, we plan to make the stuffed loin again, with our grill used to approximate the hearth roasting technique. In the meantime, we were completely pleased with the results of our efforts using a modern electric oven for "roasting." (Mid-nineteenth century folk who were getting used to their new cast iron cookstoves would have called this baked meat. Roasting was what you did before the hearth.)

We chose to make the second of the three recipes, the one for a boneless stuffed pork loin. Following Hale's directions produced a moist, well-seasoned, rolled loin that looked and tasted fabulous. It received high praise when we served it at a special-occasion family dinner.

Our version of Hale's Loin of Pork
Serves 6 to 8

Hale says to begin by boning the loin. Ours came already boned. Then she says to make a forcemeat (a stuffing) of chopped fresh sage, a bit of bread crumbs ("a very few crumbs of bread"), salt, pepper, and two or three whole allspice berries. The forcemeat will be used to fill the roll.

Our boned loin, obtained from a local organic producer, did not require parboiling to soften it. So we proceeded directly to the next step. We carefully cut the loin open to a thickness of about 1/2 inch, beginning with a shallow slice the length of the loin, then gently cutting as the loin unrolled onto the cutting board.

With the loin flat, we sprinkled the seasoned bread crumbs inside, leaving about a half-inch margin around the edges of the flattened piece of meat. We rolled the loin back up and tied it with kitchen string.

We convect roasted at 325° F (about 350° F in a conventional oven). After 35 minutes, we basted the roast with a bit of salted water, then basted again every 15 minutes until done. The total roasting time: 2 hours, until a meat thermometer inserted in the center read 168° F.

During the last hour, we put in the oven to bake along with the roast a pan of potatoes, peeled and cut into chunks, and baby bella mushrooms, some left whole, others halved, all of which had been lightly coated with olive oil and sprinkled with sea salt before baking. They were ready to serve when the pork was done.

We rested the meat for about 10 minutes. We used the time to simmer some beans to serve as a side dish. Then we carved and served our lovely roast, an early nineteenth-century classic.

The original recipe for "Loin and Neck of Pork" by Sarah Josepha Hale, with commentary, can be found in Northern Hospitality, p. 226.