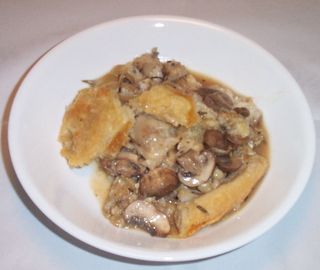 "Chouder, a Sea-Dish" is an elegant fish stew made with cod, oysters, mushrooms, wine, spices, and herbs. As if that weren't enough, it's topped with a puff paste crust. First published in 1758 by Hannah Glasse, this opulent dish is one of the earliest chowders in print. You can find the original recipe, and a few remarks about it by us, in Northern Hospitality (page 125). What follows is how we made it by pretty much following Hannah Glasse's instructions and ingredients list, but baking it in a modern oven.

We cooked ours using

To bake the chowder, we used a 5 quart, enameled cast iron stewpot with a cover. Any heavy, lidded pot will do—Dutch oven, French oven, or casserole.

In our local markets, we couldn't find the pickled pork belly called for by Glasse, so we substituted fresh pork belly. It worked fine.

Cut the pork belly from the rind, then chop the pieces into ½-inch chunks, separating out the fattier bits. As Glasse advises, toss the fattiest pieces on the bottom of the stewpot so that when it's heated the fat will melt and coat the bottom of the pot.

Set aside the remaining pork belly pieces for layering with the cod, crackers, onion, and dried herbs.

Slice the onions about ¼ inch thick.

Break up the crackers into roughly 2-inch pieces. (Any bland, not overly salty or overly sweet cracker will do.)

Add the allspice, sea salt, and black pepper to the flour and mix lightly.

Cut the cod fillets into roughly 2-inch chunks. Dredge with the flour mixture.

As Glasse recommends, start layering with the the onion slices first. Then add the herbs, pieces of cod, bits of pork belly, and broken-up crackers. Repeat the layers until all the ingredients are used up, or until you reach a few inches from the top of the stewpot. Don't overfill the stewpot. Otherwise, when cooking, the bubbling mixture might spill out. Plus, you still need room to top the chowder with the puff paste.

Glasse says to pour in the water after the puff paste covers the pot. We found it easier to pour the water in at this point in the recipe, before putting on the puff paste. That way, we didn't have to cut a large slit in the paste to pour it in. But of course you can do it in the order Glasse describes if you're so inclined.

Cut several slits in the center of the paste to allow steam to escape.

Our take on Glasse's instructions to "lute down the Cover of the Kettle" (seal it) was simply to put the cast iron lid on over the stewpot. With the puff paste already in place, this forms a sufficiently tight double seal for the chowder. In Glasse's day, covers often didn't fit as securely on pot bottoms as they do now--thus the need for "luting." Plus, Glasse was baking her chowder over a hearth fire, with hot embers placed on the lid, so she needed to be sure nothing untoward fell into the chowder!

After the chowder has baked for about 1½ hours, you can begin to make the mushroom mixture that goes into the final dish.

Start by slicing or roughly chopping the mushrooms. We used Baby Bellas, but white mushrooms would work well too. Glasse recommends a fancy type of red mushroom called morels. We looked for them locally without luck. We found them online—at $100 a pound. Certainly use them—and truffles too—if your budget allows!

Sauté the mushrooms in the butter until they begin to soften. Add the cayenne pepper. Add to the mushrooms the ¼ cup of Madeira (or other good-quality sherry if you can't find Madeira), and cook a bit longer, stirring often, until the mushrooms release some steam. When the mushrooms are cooked down and soft but not mushy, set the pan aside.

After baking the chowder for about two hours, increase the oven temperature to 400° F., remove the the lid, and bake for an additional 15-20 minutes, or until the puff paste turns a golden brown.

When the paste is golden brown and looking delicious, remove the stewpot from the oven and let it cool on a wire rack for 5-10 minutes.

Next, run a knife around the edges of the paste to separate it from the sides of the stewpot and carefully remove it in one piece, if you can. But don't despair if the paste breaks; you can reassemble it later. Or you can serve individual portions of chowder with pieces of puff paste on top. Once it's removed from the chowder, set the paste aside on a dish or platter. Transfer the chowder (sans the paste) from the stewpot to a serving dish.

Add the oysters and their liquor to the mushrooms, return to a low heat, and stir to blend. Do not bring to a boil! Overcooked oysters become hard and rubbery, and make one regret the time and money spent on them.

Note: We think that this eighteenth-century chowder is well worth the bother to make it. There are a number of steps to follow, but none of them is complicated. (Except perhaps for the puff paste. But that can also be purchased ready-made. To go all out and make your own, see our next blog post.) There's a bonus to this recipe: Making it will give you practice in shucking oysters, always a useful skill!

The original recipe, with commentary, can be found in Northern Hospitality, p. 125.