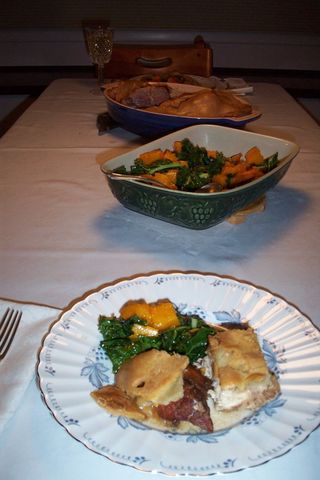 1770 Ham Pie with Kale and Butternut Squash for Dinner!

In Northern Hospitality, we point out that Mrs. Gardiner's "An Ham Pie" is moved toward the mixed-pie category by its liberal inclusion of chicken. She instructs the cook to "lay whole chickens" all around the ham, which has been made "handsome" by cutting it to "rather of a roundish Form." The ham and chicken are seasoned with mace, pepper, and a few pounded cloves. To further enhance the chickens, she advises "putting into the Bellies of each a little piece of butter." Gardiner's quaint turns of phrase remind us that whether or not you cook them, historic recipes are fun to read.

We decided that a whole leg of ham, together with several whole chickens, would make a larger pie than we wanted to have on hand—and a larger pie than our oven could handle! So we reduced the recipe by using a small, boneless ham and one chicken, cut up.

The Ham and Seasoning

We found an excellent quality, locally produced boneless smoked ham with a weight of just under 3 lbs. We chose a ham that was already rather round, so there was no need for the trimming that Gardiner recommends. We did, however, heat our ham in a 300º F oven until warm, for about 10 minutes, before seasoning it with the following:

After seasoning it, we cut our ham in half to fit our baking dish (left whole, it would have protruded too far above the sides of the dish to be covered nicely with a crust). Then we placed the two halves toward the center of the dish.

The Chicken
In order to preserve Gardiner's idea of using whole (that is, bone-in) chicken, while opting for less chicken meat overall, we cut up one chicken (4 ½ lbs.), seasoned it with some of the same mixture used on the ham (¼ teaspoon each of ground mace, ground black pepper, and ground cloves), then tucked bits of butter under the chicken pieces before arranging them around the ham in our pie dish.

The Crust and the Gravy

Gardiner leaves vague several elements of the recipe, namely how to make "good Crust" and how to make "good Gravy." As hers is a manuscript cookbook, she undoubtedly knew what crust and gravy she intended to use. But not being privy to her thoughts, we had to wing it!

For the crust, we used a combination of two 1846 paste recipes from Catharine Beecher (see the previous post on how to make this scrumptious "Puff Paste"). If you're not up to making puff paste, ready-made puff paste, which can be found in the frozen foods section of most supermarkets, works well. Or use your own favorite pie crust. Just be sure it's sufficiently large to cover your baking dish.

On to the gravy. We found that two meaty pork shanks, a little water, an onion, a little seasoning, some flour, and a bit of butter were all we needed to make a rich gravy that complemented the ham and chicken. What follows is how we made our pork gravy.

Everything went into a stock pot and simmered for 2 ½ hours, until the liquid was reduced to approximately 4 cups. We removed the pork shanks, saving them to eat separately. We removed and discarded the onion, the bay leaves, and the bouquet garni. Then we skimmed the remaining stock and set aside about 3 tablespoons of the skimmed pork fat. We put the pork fat in a saucepan, adding 3 tablespoons of butter and 2 tablespoons of flour, and stirring the mixture together until it thickened and turned light brown. To this roux, we added the warm stock, a ladle at a time, stirring after each addition over medium heat. We stopped stirrring only when the gravy bubbled nicely and had become creamy and slightly thickened.

Because our pie was smaller than Gardiner's, we poured only about half of this "good Gravy" directly into the pie, reserving the rest to spoon warm over individual servings or to reheat for use with any leftovers.

Now for the application of the crust. We carefully unfolded the Beecher puff paste we had made previously, placed it over the pie, pinched the sides of the paste to the pie dish, and decorated the top of the pie with bits of paste in the shape of leaves. Pretty!

Baking
We baked our ham pie at 425º F for 1 hour and 35 minutes. Ours is rather a slow oven. If yours isn't, you may want to start out at 400º F, or even 375º F, and turn up the heat if you think it necessary after an hour or so. The oven needs to be hot enough to cook the chicken pieces, obviously, but not so hot as to burn the crust before the chicken is cooked.

We then removed the pie from the oven, placed it on a cooling rack, and brushed the crust with an egg yolk beaten in about ¼ cup of cold water. We returned the pie to the oven and baked it until the crust was golden brown, about 10 minutes longer at 425º F.

We allowed the baked pie to cool on a rack for about 10 minutes before serving it directly from its baking dish. Mrs. Gardiner's Ham Pie, in the quantities we used, makes a delightful main course for six. For accompaniment, we baked (during the last 50 minutes the pie was in the oven) a mixed dish of chunks of butternut squash and chopped kale. Just before serving, we garnished the vegetable dish simply with melted butter and a squeeze of lemon juice. With Mrs. Gardiner's spectacular pie as our centerpiece, we dined in elegant, eighteenth-century style.

Note: Use an attractive—and sufficiently large—baking or pie dish for this recipe, so that you can bring the finished pie to the table to wow your guests. Then cut the pie open at the table to reveal the surprises of ham, chicken, and gravy inside! We used a 3.75 quart oval stoneware baking dish, dark blue exterior and beige interior, made by Le Creuset. It made a beautiful presentation, if we may say so.

The original recipe, with commentary, can be found in Northern Hospitality, p. 270.