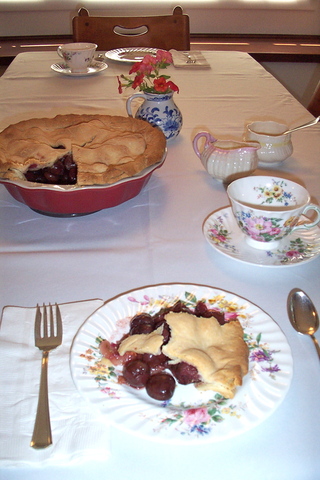 New England is perhaps  best known for pumpkin and apple pies. The fall season, when pumpkins and apples are ready for pie-making, is considered by many to be New England's best time of year. But the region's historic cookbooks also offer lots of great recipes for summer fruit pies as well, and we'll be telling you about some of them in this and upcoming posts.

We’ll start with a simple yet elegant recipe for cherry pie from the second cookbook ever written by a New Englander, The American Frugal Housewife (1829) by Lydia Maria Child.

We're often asked about the coincidence of Lydia Child and Julia Child sharing a surname and the possibility that they were related. But for both authors, Child was a name taken at marriage. Lydia Maria Child was one of the most prominent American women of the nineteenth century. She was renowned as an abolitionist and as the author of novels, biographies, essays, histories, and stories and poems for children. Today, she's remembered primarily as the author of the poem, "The New-England Boy's Song about Thanksgiving Day," which has become our national Thanksgiving song, "Over the River and Through the Woods." The American Frugal Housewife, written when Child was a young woman, is the only cookbook among her vast literary output.

Makes one 9-inch pie, with bottom and top crusts

How We Made It

We set aside one quarter of the flour. Half of the rest we put into a Cuisinart mixer along with half of one stick of the butter. We mixed it, drizzling in a teaspoon of ice water at a time, but no more than ¼ cup, just until it would hold together. We were careful not to overmix the dough, which makes it tough. We then removed it to a floured pastry cloth.

Next we rolled out this foundation dough, covered it with some of the reserved flour and dotted it with pats of the remaining butter. We rolled it again until the butter was incorporated into the dough, not worrying about lumps of butter showing through here and there.

Then we folded the dough in thirds and rolled it out again into a rectangle. We dusted the dough with more of the reserved flour and all that remained of the first stick of butter, cut into pats.

We folded the dough in thirds again and rolled it until the butter was barely incorporated. This technique produces what today is called a rough or modified puff pastry. It requires fewer rollings and resting times than classic puff pastry, but the final product is richer than standard pie pastry. The bottom crust was now ready.

We repeated these steps for the top crust.

Next we filled the bottom crust with the cherries, sprinkled the sugar and cinnamon over them, and covered the pie with the top crust.

Into the oven it went, where it baked at 425 º for 20 minutes, then at 350º for 30 minutes, until the top crust was nicely browned. (If your top crust isn't brown after the final 30 minutes at 350º, increase the oven temperature to 375º and bake for another 5-10 minutes, or until browned.) We cooled the baked pie for 15 minutes on a wire rack and immediately dug in!