Not Your Mother's Pumpkin Pie: "To Make a Pumpion Pye," from The Complete Cook (1658) 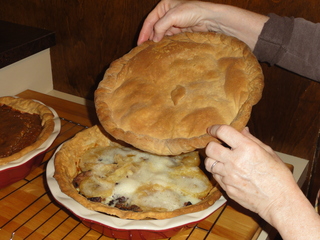 Pumpkin Pie Fit for a Queen

Now that we're smack dab in the middle of the fall, New England's best time of year (as we noted in one of our summer posts), it's time to talk about one of the seasonal pies for which New England is best known—pumpkin pie. But the pumpkin pie we have in mind isn't your mother's pumpkin pie. Far from it. That pie—a pumpkin custard, gently spiced with cinnamon, nutmeg, and a bit of ginger and allspice, and baked in a crust—didn’t come into existence until the late eighteenth century. A century and a half before that, the early settlers of New England weren't all that keen on pumpkins, or the pies that could be made from them. According to the region's first historian, writing in the 1650s, people ate "Pumpkin Pies" only because they had to, because pumpkins (like corn, another unfamiliar food) grew like weeds in the strange new world in which they found themselves. They came up with ways to cook pumpkins (and corn) so that they could survive, not so that they could enjoy what they were eating.

But their compatriots in England didn't feel the same way. To them, sitting pretty and comfortable back home, pumpkins were intriguing in their novelty, not displeasing. By the middle of the seventeenth century, pumpkins were fashionable enough that instructions on how “To Make a Pumpion Pye” were featured in a cookbook attributed to Queen Henrietta Maria, wife of the deposed and beheaded former King of England, Charles I: This recipe, bearing the cachet of royalty, was eventually found on the festive tables of New England. How do we know? A manuscript cookbook kept by the wife of a wealthy Boston merchant in the years just before the American Revolution contains an almost identical recipe. So if you'd like to have something a little different among your array of Thanksgiving desserts this year, have a go at this "pumpion pye" fit both for a queen and also for New England's first Thanksgivings.

How We Made It
We preheated the oven to 400° F and partially baked the bottom crust for 10 minutes. For our pie crusts, we used a recipe from the same time period as that of the "pumpion pye," but any standard modern pie crust recipe will also be perfectly fine.

We whisked together the herbs, spices, eggs, and sugar, then added the pumpkin strips, producing a mixture for what the seventeenth-century English called a "froiz"—essentially a sweetened omelet or frittata. We melted 2 tablespoons of the butter in a skillet on high heat, poured in the froiz mixture, and immediately reduced the heat to medium. When the froiz puffed up and bubbles began to form on top, we removed it to a plate, melted an additional tablespoon of butter in the skillet, flipped the froiz over and, with the heat off, returned it to the skillet for 3 to 5 minutes, allowing the side that had been on top during the initial frying to cook. Then we set the froiz aside to cool.

Now we were ready to fill our pie. We put a layer of froiz strips on the bottom of the pie, then a layer of apple discs, then a layer of currants, then repeated the sequence until the pie plate was almost full. We dotted the apple discs that formed the top layer with the remaining 2 tablespoons of butter, and covered the pie with the top crust.

Into the oven it went, for 30 minutes at 400° F, then for 60 minutes at 375° F. (After the first 30 minutes at this temperature, we loosely covered the pie with aluminum foil to prevent excessive browning of the top crust.) While the pie was baking, we beat together the three egg yolks and the wine to make a "caudle." When the pie was done, we removed the top crust, poured the caudle over the top of the filling, and replaced the top crust. We left the pie on a wire rack to cool for about an hour. As the pie cooled, its residual heat cooked the caudle and mingled its flavors with the pie's already rich blend of pumpkin, apple, currants, herbs, and spices.

"Pumpion Pye" made for a truly memorable Thanksgiving at our house last year!

The original recipe, with commentary, can be found in Northern Hospitality, p. 301.