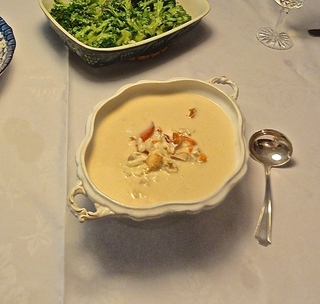 Lobster, Literary Larceny Linked!
"Mrs. N. K. M. Lee" is described on the title page of The Cook's Own Book: A Complete Culinary Encyclopedia (1832) as a "Boston Housekeeper." But nobody has ever been able to verify that an individual by that name, whether a Boston housekeeper or a zookeeper, ever existed. That's not all. The Cook's Own Book is more than 90% plagiarized from English cookbooks. The lobster fricassee recipe is lifted word for word from Catherine Dalgairns's The Practice of Cookery, Adapted to the Business of Every Day Life (1830). By the way, if you're wondering what a fricassee is, see our March, 2012 post on Eliza Leslie's recipe for "Fricasseed Rabbits."

Pseudonymity and plagiarism didn't stop The Cook's Own Book from being one of the most frequently reprinted cookbooks published in the United States in the decades leading up to the Civil War, just as lots of stolen material in Hannah Glasse's Art of Cookery Made Plain and Easy (1747) didn't prevent it from becoming the most popular English cookbook of the eighteenth century, and just as a comparable proportion of theft in Amelia Simmons's American Cookery (1796) didn't impede the considerable success of that "first American cookbook." The truth is that our idea of a book as an original creation by someone identified as its author has taken hold only relatively recently. For a long time, printed material was thought of as community property as much as it was considered the exclusive possession of whoever wrote it, and this was particularly true of the material in cookbooks. Cookbooks filled with recipes taken verbatim from earlier cookbooks, without acknowledgment, were still being published as recently as a hundred years ago.

How We Made It
We boiled the lobsters one at a time for 11-12 minutes each (the time required for our size lobsters) in a 8-quart pot in about 5 quarts of the water.

We took each lobster, separated the claws and large legs from the body, and got the meat from the legs with a seafood pick. We had mislaid our nutcracker, so we cracked the claws with a knife and removed the claw meat. The knife also came in handy for removing the membrane under the tail, so that we could get at the tail meat.

We set the shells aside. "Lee" says to extract and set aside as well the coral (the ovary of the female lobster) and the spawn (the eggs). The law requires that any female lobster bearing eggs when caught must be thrown back, but it's OK to keep those with coral only. We managed to retrieve a tablespoon of coral from our lobsters.

We put the remaining quart of water in the same pot in which we'd boiled the lobsters, added the mace, white pepper, and salt, put in the coral and shells that we'd set aside, and simmered this stock for about an hour, occasionally adding water as it cooked down. Then we strained it into a casserole, where it was ready for the flour, cream, and butter to be added to it.

We stirred the flour into the cream so that the mixture was free of lumps, poured the mixture into the stock, cut the butter into several small pieces, and added them as well. After mixing thoroughly with a wire whisk until the sauce was thickened and smooth, we added the lobster meat, squeezed in the lemon juice, and served it up on a bed of rice.

As we dug in, we toasted pretend Boston housekeepers and creatively huckstering nineteenth-century New England publishers, without whom we never would have enjoyed Catherine Dalgairns' shellfish masterpiece!

The original recipe, with commentary, can be found in Northern Hospitality, p. 164.