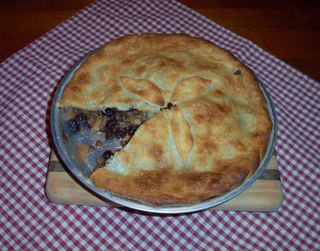 Mincing Medievalism
Mincemeat pie is a relic of the time centuries ago when two things were true of European food: one, that until Shakespeare's day pies were made more often with meat, poultry, or fish than with fruit or vegetables as the primary ingredient; and two, that very few dishes of any kind, including pies, tasted primarily sweet or primarily savory. Most dishes, including pies, offered what we would consider a blend of sweet and savory tastes, something like the sweet-and-sour items on a Chinese restaurant menu. Or like that American classic of the Betty Crocker era--ham baked with brown sugar and pineapple.

Mincemeat pie is one of the very few items on the modern American table--admittedly mostly making its appearance only around the holidays--that captures the taste of medieval cuisine. When made with beef, sugar, apples, and raisins, mincemeat pie is virtually the sole surviving example of what, in the words of Harriet Beecher Stowe, used to be "made by the forties and fifties and hundreds" in New England—a pie with meat, poultry, or fish as the main ingredient that tastes like something intriguingly in between sweet and savory. Such pies made with shredded or minced mutton, veal, or beef were the most popular kind and came to be served on holidays, especially on Thanksgiving in New England, and on Christmas in Britain.

As early as the eighteenth century, English cookbooks began to offer the option of mincemeat pies made without meat. But in the United States until the twentieth century, most recipes for this type of pie, including that of Lydia Maria Child, remained truly meaty. Now in the twenty-first century, of course, mincemeat means to most people a mixture of raisins, apples, and, as one product website has it, "a signature blend of spices." The fact that this mixture is called mince-meat is left mysteriously dangling. This might be a good time to take a break from the overly sweet and insipidly meatless mince pies of our day and sample a robustly-flavored mince-meat pie of an earlier day.

By the way, Child wasn't being careless when she gave her recipe the name "Mince Pies." She was writing at the tail end of the brick-oven baking era, when people fired up their bake ovens twice a week at most. This meant that when they did get the ovens going, they tended to make things in much larger quantities than we're used to now. Child specifies amounts of ingredients that would easily suffice for six pies. We wanted only one pie and adjusted the ingredients accordingly.

How We Made It
The Filling
We simmered the beef chunks until they broke up easily with a fork, about 90 minutes. While the beef was cooling, we minced the suet. We peeled, quartered, and cored the apples, then chopped them into medium-sized pieces. We mixed together the suet bits, apple pieces, sugar, raisins, brandy, and spices. After the beef was thoroughly cooled, we chopped the pieces fine—in other words, turned them into mincemeat—and added them to the apple-raisin mixture.

The Crust
Now we were ready to make the crust, for which we used Child's own recipe for what she calls "pie crust for common use." First, we preheated the oven to 300º. We set aside ¼ pound of the flour. We put the remaining ¾ pound of the flour and 6 tablespoons of the butter in our Cuisinart mixer and, using the basic chopping blade, mixed them until the dough would hold together. We spread a pastry cloth over our cutting board, sprinkled some of the reserved flour on it, placed the dough on the floured cloth, and divided it in half, setting one piece aside for the top crust and leaving the other piece on the pastry cloth to be turned into the bottom crust.

The result was an elegant looking mince pie that proved, when served and eaten, to be meaty, hearty, and subtly flavored. In a word, delicious!