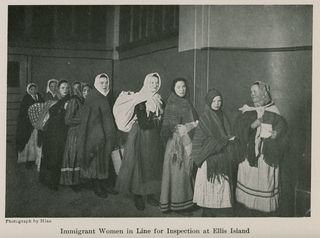 Vetting Immigrants Once Upon a Time

The New Nativism--An Old Story
It has become almost a cliche to say that the present period of American history, beginning around 1975, is similar in many important ways to the period beginning roughly a hundred years earlier. We are living now, it appears, in a second Gilded Age, with pronounced inequalities of wealth and income and with transformative changes in our technology, economy, and the demographic profile of our society.

The last of the trends on this list—the arrival of lots of new people—has received much attention in the past few years from political commentators and is in the headlines almost every day in the coverage of the current presidential campaign, because of the xenophobia that constitutes the primary plank in the platform of the Republican candidate.But we have indeed seen this movie before—before the movies were invented. Anti-immigrant attitudes became a standard part of American political and social life from the 1870s on, as people who felt they were unquestionably American, because their ancestors had immigrated here some generations earlier, looked with considerable distaste upon those who had arrived more recently. The need for immigrant labor in a rapidly industrializing America little concerned these nativists.

And because at that time racial and ethnic thinking was broadly endorsed even in the high reaches of academia, educated people took the lead in disparaging the new Americans. As presidential grandson and great-grandson Charles Francis Adams, Jr., wrote, for example, "Quick of impulse, sympathetic, ignorant, and credulous, the Irish race have as few elements in common with the native New Englanders as one race of men well can have with another."

We no longer use "race" as a category to define ethnic groups. We reserve the term . . . for what? As a way to define and differentiate not Irish from Anglo-Saxon New Englander, but Latinos or African-Americans from "white" (including many ethnic) Americans. If it's odd to apply race to now-forgotten ethnic divisions, why is it not odd to apply the term so confidently to current social constructs? Future generations might find preposterous our faith in the validity of the category of race itself, just as we find its application to the Irish and the "native" New Englander preposterous. We certainly hope so.

But back to the nineteenth century. The views of educated "native New Englander" women were sadly often similar to those expressed by the male intelligentsia. In their popular 1869 household manual, The American Woman's Home, the celebrated domestic authority Catharine Beecher and her younger sister, the world-class novelist Harriet Beecher Stowe, indulged freely in the standard denigrations of Irish servant girls as utterly incompetent. In one passage, the sisters portrayed a typical "daughter of a neighboring farmer [as] . . . tall, well-dressed . . . grave, unobtrusive, self-respecting, yet not in the least presuming" who performs her tasks in such a way as to produce "that neat orderly appearance that so often strikes one in New England farm-houses." The Irish counterpart to that New England farm girl, as conjured up by Beecher and Stowe, was "a raw Irish maid-of-all-work, a creature of immense bone and muscle, but of heavy, unawakened brain" who "establishe[s] . . . a reign of Chaos and old Night in the kitchen and through the house."

Then as now, sentiments of this sort were expressed in a variety of ways. One of the forms nativism and racialism takes that begins to bring this discussion around to foodways is a special emphasis on practices and customs thought to be imperiled when large numbers of people from new groups enter the society. Donald J. Trump's recent belligerent defense of the greeting "Merry Christmas"—"If I'm president, you're going to see 'Merry Christmas' in department stores, believe me"—comes to mind. Thanksgiving may now seem a simple, anodyne family holiday. But truth to tell it was used in the late nineteenth century by "native" Americans who perceived immigrants as a threat to their culture in just the way Trump uses Christmas today. For those Yankees and others of their "race," the Thanksgiving holiday was an occasion to assert their entitlement to American identity by sacralizing one particular "American" feast day.

To understand this ideological use of Thanksgiving, we need a little background on the creation of the holiday. Most of us were taught in school that the celebration of Thanksgiving descended from the Pilgrim harvest feast at Plymouth in 1621. This is a historical fabrication. While there were many "thanksgiving" days celebrated by pious New Englanders over the centuries (just as there were many "fast" days to atone for perceived sins), Thanksgiving as a national holiday was created by Abraham Lincoln during the Civil War. His intention in turning a regional into a national holiday was to promote the idea of a unified United States.

A bit later, as anti-immigrant sentiments rose, the tight connection to the New England Protestant past was brought to the fore in the celebration of the day. That's when (in the late nineteenth century) the particular connection to Plymouth was invented.

As the current presidential campaign has reminded us, holidays can be used as weapons in the culture wars. But culture wars themselves are not new—as a symbol of the Protestant culture that nativists and racialists felt was threatened by the new, mostly Catholic immigrants, Thanksgiving served the same purpose then that Christmas does in our multi-religious world today. Learning to eat like Americans—to partake of the turkey, stuffing, and gravy—odd and insignificant as it might seem, became a litmus test of Americanness in the nineteenth century.

It was also at this time that two of the most basic subsistence foods of colonial New England—bean porridge and bread made with cornmeal and rye flour—were transformed, primarily by lacing them with generous quantities of molasses, into Boston Baked Beans and Boston Brown Bread. These foods were being updated for the industrial era by the addition of sweeteners made ever cheaper by better production and transportation methods. Molasses was used rather than white sugar because it better evoked the image of a rustic, rugged integrity of colonial times. Never mind that the colonials themselves didn't sweeten either their beans or their bread. These actually new but purportedly old "Boston" dishes were created to assert that real New England food and the true American way of life were things in which the immigrants could never participate in the way that people who traced their families' presence to colonial times could.

What the immigrant newcomers could be made to do, however, was accept and admire this "genuine" American tradition that long predated them. Among other things, the school lunch menu was assessed with this goal in mind. The Boston Cooking School, a key institution of both the domestic science movement and the Colonial Revival, developed various strategies to make sure that immigrant children passing through American public schools would ingest at lunchtime the ye Olde Americanism culinarily enshrined in Boston Baked Beans, Boston Brown Bread, and other Colonial Revival favorites. At this point it seems appropriate to ask the old Yankee Colonial Revivalists a question made famous by another recent Republican politician: "How'd that work out for ya?"

Here's the answer. A few years ago, we spoke to a group of college students about various historic New England dishes. Not a single one of them had ever heard of a single one of the foods we were presenting to them. Their menu was a heavily-adapted but recognizably multi-cultural pastiche of burgers (German), pizza (Italian), and tacos (Mexican). We hope it isn't adopting an overly rosy perspective to hold out the hope that the present hue and cry about Christmas, Christians, Muslims, and such, will eventually resolve itself into a matter-of-fact acknowledgement that we're all Americans together.