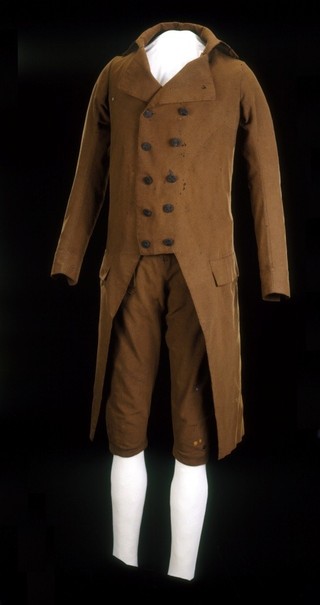 George Washington's inaugural suit, made by the Hartford Woolen Manufactory

9
In 1794, the English cloth manufacturer Henry Wansey stayed at a Boston inn called the Bunch of Grapes, paying in today's money about $18 a day for a bed and all meals (including tea). Dinner, the main meal, was served at 2:00 p.m. Wansey noted the speed with which his fellow boarders dispatched their midday fare: “In half an hour after the cloth was removed every person had quitted table, to go to their several occupations and employments, . . . for the Americans know the value of time too well to waste it at the table.”

10
At the first American presidential inauguration in 1789, the cloth for the suits worn by President George Washington, Vice President John Adams, and the members of Congress from Connecticut was made at the Hartford Woolen Manufactory. Unfortunately, by 1795, this early U. S. industrial venture had failed. Henry Wansey, visiting Hartford after his sojourn in Boston, "found it much on the decay . . . I saw two carding engines, working by water, of a very inferior construction.”

These intimate details about life in the young republic--commercial dining, the beginnings of American industry--paint a picture of early American society that we don't often see. How do such portraits of ordinary American life help us understand American Cookery by Amelia Simmons? Find out this November in our new book from University of Massachusetts Press, United Tastes: The Making of the First American Cookbook.