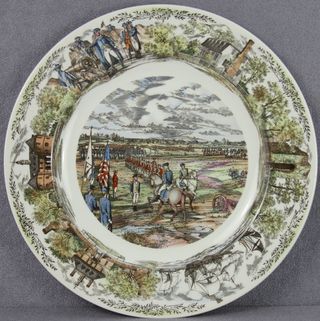 The Surrender at Yorktown, depicted on a British-made Wedgwood plate

7
In the eighteenth and nineteenth centuries, printers were often also shopkeepers, selling not only books, newspapers, and stationery, but also minor luxuries such as chocolate, spices, and tobacco. The older among us witnessed the remnants of this tradition at our local newsstands, where chewing gum, breath mints, candy bars, and cigarettes nestled near the daily papers and monthly magazines. The Internet has pretty much killed off the newsstand, but the practice of combining the sale of newspapers and magazines with the vending of candy and mints persists at supermarket and pharmacy checkout counters.

8
In the early years of political independence, many inhabitants of the new nation wished to proclaim their fledgling identity as Americans by purchasing household goods inscribed with patriotic insignia. But ironically, as historian Kariann Akemi Yokota explains, only established British manufacturers such as Wedgwood were in a position to meet the demand of the American market for "jugs, plates, and mugs" on which were depicted “rousing scenes of the defeat of the mighty [British] empire” by the American rebels.

These intimate details about life in the young republic--how printers made ends meet, early forms of patriotism--paint a picture of early American society that we don't often see. How do such portraits of ordinary American life help us understand American Cookery by Amelia Simmons? Find out this November in our new book from University of Massachusetts Press, United Tastes: The Making of the First American Cookbook.