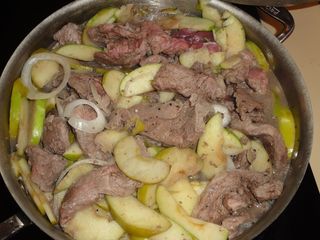 Beef Stewed with Apples--indeed very good! A dish from 1846.

Despite its title, this dish isn't much like a modern stew of pieces of meat, fowl, or fish simmered along with vegetables in a rich broth or gravy. It's more like a seventeenth- or eighteen-century hash, which, as we explain in Northern Hospitality, was an elegant preparation of thinly sliced meat. Beecher's recipe calls for beef or veal, cut "in thin slices," and apple "sliced fine."

We confess that we thought this might be a rather bland dish. It was a popular preparation right into the nineteenth century, which is why we included it in our book. But there is so little to it--just sliced beef or veal, apples, a bit of onion, salt, pepper, and some butter to coat the pan. Read More

Reminds me of the pork/apple/onion pies from the 18th century. Harkens back to that *even earlier* late medieval combo of meat and fruit that we still see in real mincemeat. And if is delicious! The pork pies have a bit of spice in them, though. Pepper, allspice (Jamaica pepper), etc.