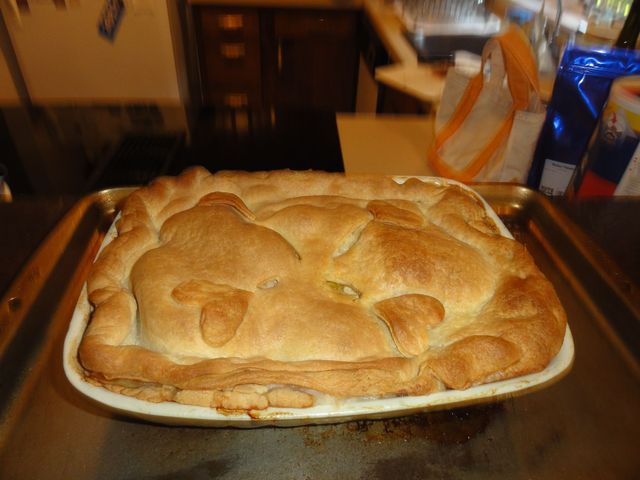 Clearly from the name she gave her recipe, Mrs. Webster thought Thanksgiving was a time for pies--and not only of the sweet variety. This savory one is as delightful an addition to the banquet today as it was in the 1840s when the recipe was first published. The tradition of adding savory pies to the meal was widespread in New England, in part because domesticated turkeys in the nineteenth century and earlier were generally smaller than ours today, weighing on average eight pounds or less. To feed hungrey dinner guests, the turkey was supplemented with roast meats and other dishes, such as this one. We think this is a Thanksgiving tradition well worth reviving.

A note about the recipe: Mrs. Webster, like most nineteenth-century housewives, lived closer to the realities of farm life than we do today, She wasn't the least bit squeamish about making cold cuts from pig's head meat, as shown in her recipe for Pressed Head (Northern Hospitality, p. 228). Nor did she bother to remove the bones before adding the chicken to this pie. If you or your guests would rather avoid finding bones in their piece of pie, it's fine to remove them ahead of time or use boneless cuts of chicken rather than a whole roaster. However, it's also kind of fun--and it adds to the flavor--to leave the bones right in the pie. When the pie is well-baked, the bones are easily moved aside with a fork. Diners are also permitted to remove them with their fingers as they eat.

The original recipe by Mrs. A. L. Webster appears in The Improved Housewife (1844). The recipe, with commentary, can be found in Keith Stavely and Kathleen Fitzgerald's Northern Hospitality: Cooking By the Book in New England (University of Massachusetts Press, 2011), p. 290.

In a large pot, stew the chicken pieces along with the remaining carcass in water to cover for about 11⁄2 hours.

Remove the chicken pieces from the broth to a bowl and dust with flour. Season with the salt and pepper, and set aside to cool. Reserve the broth.

Line a large baking dish with the pie dough and then line the dough with parchment paper or tin foil. (We used a 3 quart dish, 111⁄2 x 83⁄4 x 3 inches.) Fill with pie weights, dried beans, or rice and bake for 10-15 minutes, until the bottom of the crust is dry. Remove from the oven to a wire rack.

Put the chicken pieces into the bottom crust, dot with the butter, and pour in enough of the reserved broth to cover the chicken.

Cover the pie with the puff pastry dough, lightly crimping the sides together.

Place on a baking sheet and bake for 15 minutes at 425°F. Reduce the oven heat to 400°F and bake for an additional 45 minutes, until the top is lightly browned.

Set on a wire rack, cool briefly, and serve.