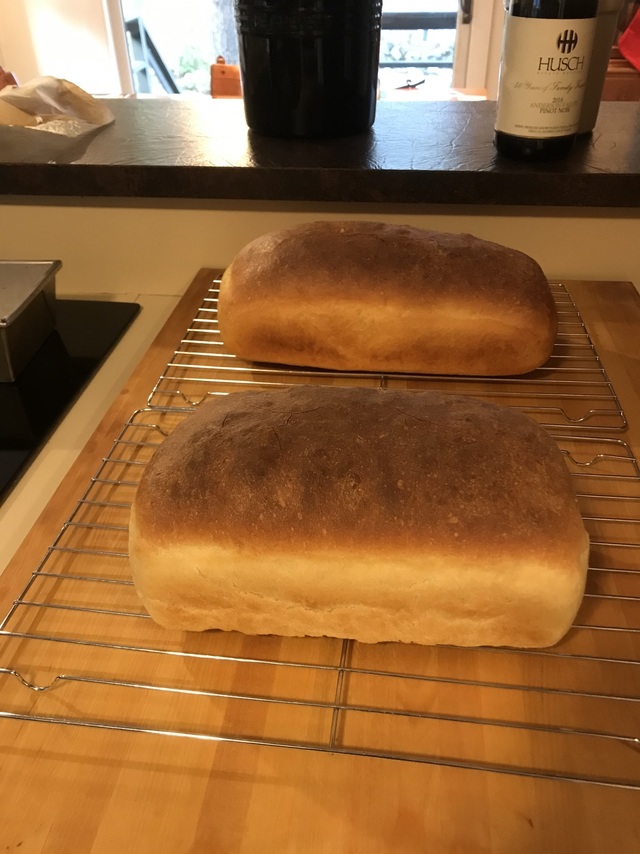 Our "Flour Bread," following the directions of Lydia Maria Child. Easy to make, great to eat!

Since the pandemic spring of 2020, we've been attending a wonderful online workshop, led by food writer and historian of bread, William Rubel, called "Bread History and Practice." There's a Facebook group, too, for any who might be interested. For the December holiday group meeting, we decided to make 19th-century American author Lydia Maria Child's "Flour Bread," from The American Frugal Housewife, 1829. (We used the 1833 edition, as reproduced verbatim and with commentary in our book, Northern Hospitality: Cooking by the Book in New England, University of Massachusetts Press, 2011).

Baking in December, in a wood-heated house, meant moving the sponge and dough around quite a bit to warm (but not too warm) spots while it bubbled and rose. Making bread and ferrying it around the house is good winter exercise!

We loved the fact that in this case we could use Child's nineteenth-century recipe--more like a series of directions, really--with little alteration. We didn't cut the amount of sponge and dough down (or scale them up), but simply followed her guidance and made two loaves, as she recommends.

One alteration we did make was in the kind of yeast used. We don't have access to hops. Okay, we probably do have access to hops, on the internet, as with everything else. But we didn't feel like ordering up a few ounces of hops just now when massive amounts of pandemic holiday deliveries are going on! Thus no "barm" (natural yeast from the dregs of the beer- or wine-making process) for us. So instead of her "one gill of lively yeast [barm]," we used two level teaspoons of active dry yeast (Red Star), dissolved in four ounces of warm (about 85ºF) water, with a mere pinch of sugar to feed the yeast. After about eight minutes, the yeast was as lively as can be. (Bubbling up is good; not bubbly, maybe your water was too hot or too cold.)

To make a six-cup sponge, which Child calls for ("I judge about three pints of sponge would be right for two loaves"), we added to the yeast 4 1/2 cups of warm (about 85ºF) tap water, 1 1/2 cups of all-purpose flour (our favorite is King Arthur), 1 1/2 cups bread flour (also King Arthur) and mixed it well to make a sponge "soft enough to pour," as Child writes. That's when our household peregrinations began. We lightly covered this liquidy mixture with a towel and moved it upstairs to our study, where it rested comfortably on a side table. (Our study is directly above our livingroom wood stove in our open-plan house so it's usually nice and warm at mid-morning, the time when we were mixing the sponge.)

The sponge rose quite satisfactorily and looked "frothy," as Child recommends it should, in about 1 1/2 hours. Using her barm leavening, the "lively yeast" requires sitting out overnight to become active. If it doesn't rise overnight, she recommends stirring in a little more "emptings," another term for barm. As William Rubel has often pointed out in the Bread History seminar, nineteenth-century folks in Britain, and most folks in the US, too, were not fond of sour-tasting dough. Thus Child says that "if it rises too much, taste of it, to see if it has any acid taste." The remedy, if it tastes acid, is to "put in a teaspoon of pearlash [much like baking soda] when you mould in your flour." But, she warns, be sure to dissolve the pearlash well in water before using. Otherwise, "if there are little lumps, the bread will be full of sour spots." Sounds like she knows whereof she speaks. But we were able to avoid this pitfall, as our sponge rose, but neither too little nor too much.

We then journeyed back downstairs to our kitchen with our active sponge and began the somewhat messy process of mixing in, one cup at a time, equal amounts of all-purpose flour and bread flour, enough to make a shaggy dough. Our sponge required about five cups of each type of flour before it held together well enough to turn it out onto a well-floured board.

From there, with floured hands and a bit of flour for dusting the board occasionally, we kneaded the dough into a big, fat, lovely, glossy mass. This took about twenty to twenty-five minutes of kneading. We didn't find it onerous to do the kneading, chatting away and one of us performing scullery duty while the other kneaded. But if you'd rather not knead by hand, you can put the dough in a standing mixer and, on very low speed, knead it until it holds together nicely and has that telltale glossy, somewhat tight surface. Okay, that's a bit imprecise. But that's the art of knowing your dough. You'll be able to tell--if not on the first loaf you make, then soon. Child's directions are simply to "knead it up pretty stiff."

We were aiming to make Child's two loaves, and our mass of dough, cut in half, fit perfectly into our two, well-greased bread loaf pans. These we set in a warm place. That is, back upstairs we went with our pans of dough covered lightly. We left them resting for one hour. By then, the dough was just beginning to crest over the tops of the pans. In one case, it even began to "rise up and [show] cracks," just as Child writes. Depending on the weather, the temperature in your house, and your yeast, this rising could take anywhere from forty minutes to a bit longer than an hour.

About half-way through this one-hour rising, we preheated our oven to 425ºF, a bit on the low side of our preferred bread-baking temperature for most doughs. But then, mostly, we bake heartier wholewheat breads, so these breads seemed to need a slightly cooler oven than usual. Experience tells us that when it comes to baking bread (if we're not baking in a cast iron dutch oven with a cover, as we do when making sourdough bread), then 425ºF is hot, but not too hot. We also spritz the oven with water before putting the loaf or loaves in, and spritz the bread occasionally during baking, perhaps every twenty minutes or so. Child wisely tells her readers that if the oven's too hot "it will bind the crust so suddenly that the bread cannot rise," and if it's too cold, "the bread will fail." Again, the voice of experience there, to be sure.

Here's what Child says about oven temperature: "White bread and pies should not be set in the oven until the brown bread and beans have been in half an hour." But of course she's talking about a wood-heated oven--put the right size wood in, burn it, shovel out the ashes, put the food in, seal the oven, open it again to add more food, etc. Ah, the poor nineteenth-century housewife! We had neither a wood-burning oven nor pans of brown bread and beans to worry about.

Child concludes by saying that "Flour bread should not be too stiff." And we conclude by saying that, after baking at 425ºF for 30 minutes, we checked the color of the bread--still too light. After another 10 minutes, almost right. We took a loaf out, tapped the bottom, and (good news) it sounded hollow. But the tops weren't quite browned enough, we felt. We have a "slow" electric oven. So the bread went back in the oven. After another 7 minutes, they looked perfectly baked, in our opinion. (And, after all, they were being made for us alone--pandemic times!) We took out our loaves, cooled them on racks in their pans for 5 minutes, then removed them from the pans and let them cool completely before slicing. The first couple of slices, eaten with a bit of butter, were lovely. We had some more for dinner, sliced and toasted, spread with cream cheese and topped with smoked salmon. Heavenly.

A note about salt in this bread: Child doesn't call for any salt in her bread. Certainly for this amount of dough, most modern bread recipes would recommend adding one to three teaspoons of salt. We didn't miss the salt at all in the final product. But you could add a bit, if you want. We like to use sea salt, but that's just a personal preference. If you add salt, go lightly and add one to two teaspoons to the dough when you knead it.

Check out the original recipe, with commentary, in Northern Hospitality: Cooking by the Book in New England by Keith Stavely and Kathleen Fitzgerald (University of Massachusetts Press, 2011), pp. 355-56.