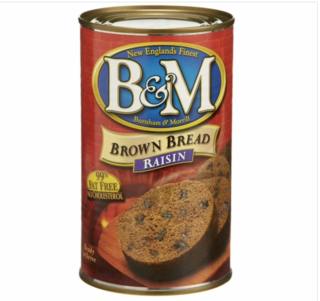 If you grew up in or around Boston in the 1950s and '60s, as one of us did, then at one time or another you undoubtedly ate Brown Bread (aka Boston Brown Bread) from a can. Despite the word "brown" in its name, this was not some kind of before-its-time fresh-baked, super healthy bread. No, indeed. We're talking about a mass-produced, steamed, and highly sweetened loaf, sold—yup—in cans. True enough, even the canned variety was, and still is, made with whole grains—cornmeal, rye flour, and whole wheat flour—but its high molasses content will give you in just a single ½ inch slice almost a quarter of your daily recommended dose of sugar. The particular bread we're talking about is made by the B&M (Burnham and Morrill) company of Portland, Maine. There are few truly regional foods left in New England, but these cans of steamed Brown Bread certainly count as one of them, given their one-time ubiquity in the region and the vivid memories many people have of eating warm slices of B&M Brown Bread as children.

It's peculiar, to say the least, that so many Bostonians and other New Englanders once considered these gaudy B&M cans of overly sweetened "bread" to be the best exemplar of a food meant to honor and approximate the humble diet of the first English settlers in the region. In three previous posts—Growing Grains and Ingrained Ideas in Colonial New England, A Very Good Breade Made of Indian Corn, and All Steamed Up: Ryaninjun Becomes Boston Brown Bread—we traced the cultural and agricultural conditions that led the New England colonists and their descendants on a path from a heavy bread of necessity made of cornmeal and rye flour (with little or no wheat), to a slightly lighter "third bread" made of cornmeal, rye, and wheat (when wheat was more readily available), and finally to a brown bread of cornmeal, rye, and wheat, made with molasses (an ingredient that never appeared in the earliest colonial breads) and often steamed to make it more like a pudding. This last uniquely New England bread is the one that came to be known as Steamed Boston Brown Bread. In its sweetest form it's a close cousin of the English Plumb Pudding (named for the treats or "plumbs" in its batter). The resemblance between the two was intentional on the part of the Victorians who highly sweetened and always steamed their Boston Brown Bread.

If you've never eaten the canned variety of brown bread, you might decide to buy a can, overlooking the inherent contradictions in a factory-made food designed to imitate something cooked in kettles over hearth fires or baked in brick ovens. If you do, you might find yourself wondering what to do with it once you've got it home. First, open the can and shake the bread out. If it won't budge, which sometimes happens, open the other end of the can so you can push the "loaf" out. Next, cut thick slices of the sticky, round bread. (Be warned, it'll stick to the knife.) Warm the slices on both sides on a lightly greased griddle or in a frying pan, butter the slices like toast, on one side, and serve.

Back in the day, B&M Brown Bread was invariably served with warmed-up B&M Baked Beans (also from a can), and with boiled or fried Fenway Franks (or, truth be told, with any other variety of hot dog that was on sale that week). But trust us (the one of us who grew up with it), the hot dog brands may have changed but the beans and brown bread, unless they were homemade, were B&M. Here's another insider tip: there are two kinds of B&M Brown Bread, plain and with raisins, and the raisin kind is the best. Or at least that's the childhood recollection of the one of us who's eaten it.

When should you eat your B&M Brown Bread? you might wonder. The meal we've outlined—brown bread, baked beans, and hot dogs—was always consumed on Saturday nights. It was, in fact, the one and only regular Saturday night supper in most Greater Boston homes, just as Prince spaghetti and "meat sauce" ("Bolognese," as some now insist on calling it) was reserved for Wednesday nights. (Curious about how it came to be that brown bread, baked beans, and hot dogs were always eaten on Saturday night? Take a look at our book, America's Founding Food: The Story of New England Cooking, pp. 59-62.) The evening meal was universally called "supper." Only the snobs on Beacon Hill or up on the North Shore called it "dinner."

So, yes, B&M Brown Bread ("New England's Finest," as the can asserts) and Baked Beans ("Brick Oven Baked," as the can claims) can still to be found on supermarket shelves. But it cannot be denied that their heyday, at least in New England, has passed. Personally, we don't regret the decline in popularity of the canned versions of these classic New England foods. Yet we do admit to a fondness for the Colonial Revival Brown Bread when it is homemade. And we're happy to say that the recipes for it found in old New England cookbooks offer a taste of the real thing. Making the bread at home also means you can avoid ingredients like dextrose and corn oil that are found in the factory-produced version. Plus, it's fun to make your own.

Well, it's fun, to an extent. Steaming the bread presents problems for most modern bakers. First, you must find empty cans the size of coffee cans to make it in. Does anyone still buy coffee in cans? Then, you must rinse and dry the cans, coat their interiors with butter or other fat, pour the batter into them (but not up too high), cover them with tin foil or cheesecloth and string, lower them into kettles of boiling water, being careful that the water does not seep into the cans, and watch over them as they steam for three to five hours.

We've made that first cousin of Steamed Boston Brown Bread, steamed pudding, and we can attest that the whole process of preparation, including the steaming, when done on a cold winter Saturday with little else to do but stay inside and cook, can be enjoyable. But we think most home cooks and bakers will be as cheered as we were to learn that some of the original nineteenth-century brown bread recipes call for baking rather than steaming the batter. Of course, you can go ahead and steam it if you like.

For our further convenience, we took the idea of baking brown bread a small step farther and made one of the recipes, the one from 1898, as muffins. With the other one, from Fannie Farmer, we made it in the classic bread form. Both turned out well. We enjoyed eating them at breakfast with coffee and as an afternoon treat with tea. We skipped the canned beans and franks, leaving that particular combination in the realm of happy childhood memory.

Our versions of 1898 Brown Bread (Muffins) and Fannie Farmer Third Bread appear in the next post.